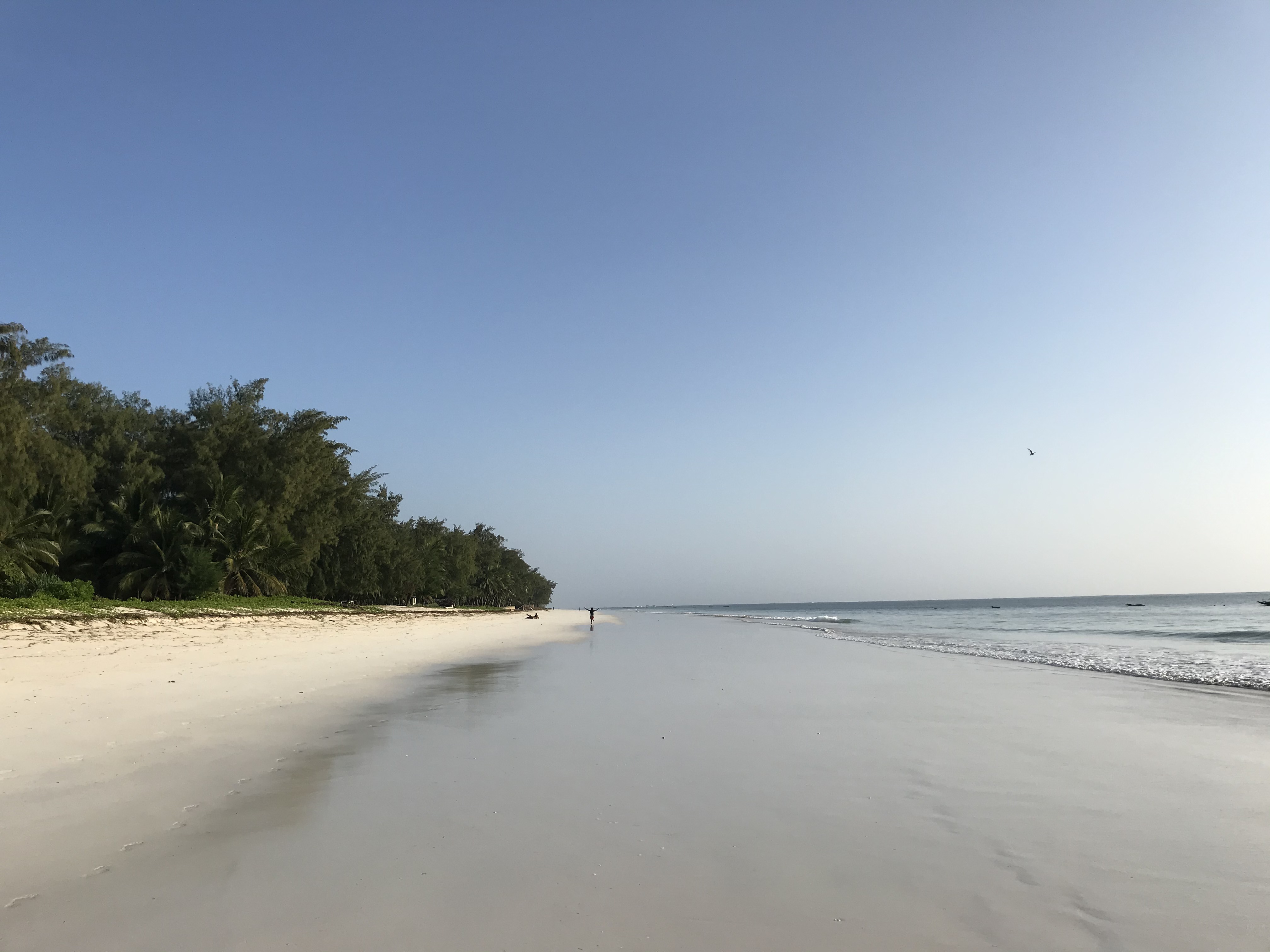 Posted at 10:42h in Family holiday, Kenya, Safari by wophil

Even after 50 years of travelling, I never cease to be amazed by the speed at which we be transported between two different worlds. On the northern hemisphere’s shortest day of the year, my family and I left behind the cold, wet skies of England, traversed the white-capped peaks of the Alps and brooding waters of the Mediterranean to cross the Egyptian desert on the northern coast of the African continent. The last orange rays of sunlight disappeared over the sands by Lake Nasser, and further south the lights of Khartoum twinkled around the black ribbon of the mighty Nile. And in a heartbeat we were breathing in the humid, earthy scent of a Kenyan night, ensconced in the colonial style comfort of Hemingways Nairobi overlooking the site of Karen Blixen’s coffee farm. 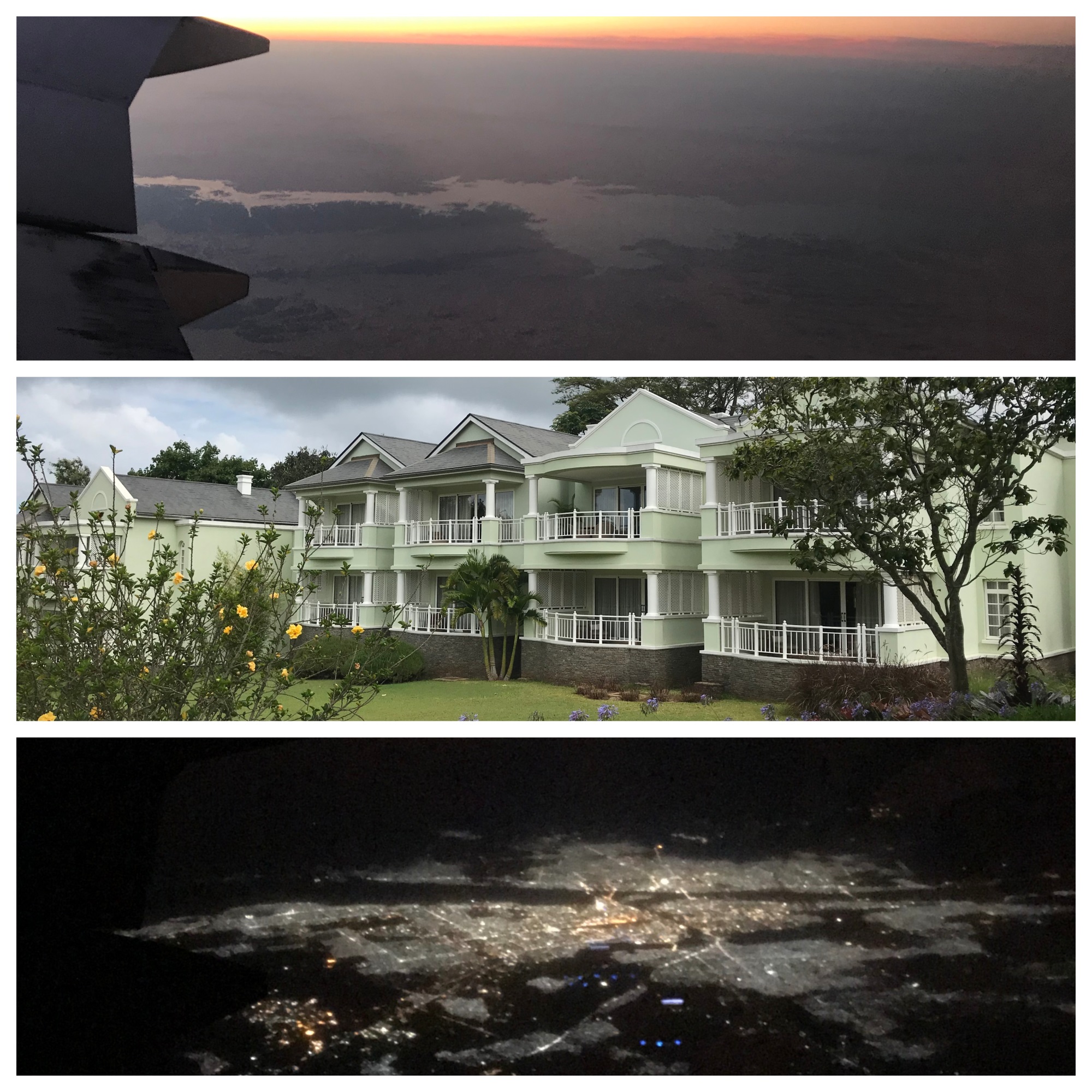 Above:  Top: The last orange rays of sunlight disappeared over the sands by Lake Nasser. Middle: Hemingways Nairobi.  Bottom: The lights of Khartoum.

With a few hours to spend in Nairobi the following morning, we took the opportunity to visit Daphne Sheldrick’s Elephant Orphanage where we were introduced to a dozen or so young elephants which had been rescued from poaching incidents and weather events in Samburu, the Masai Mara and Tsavo. 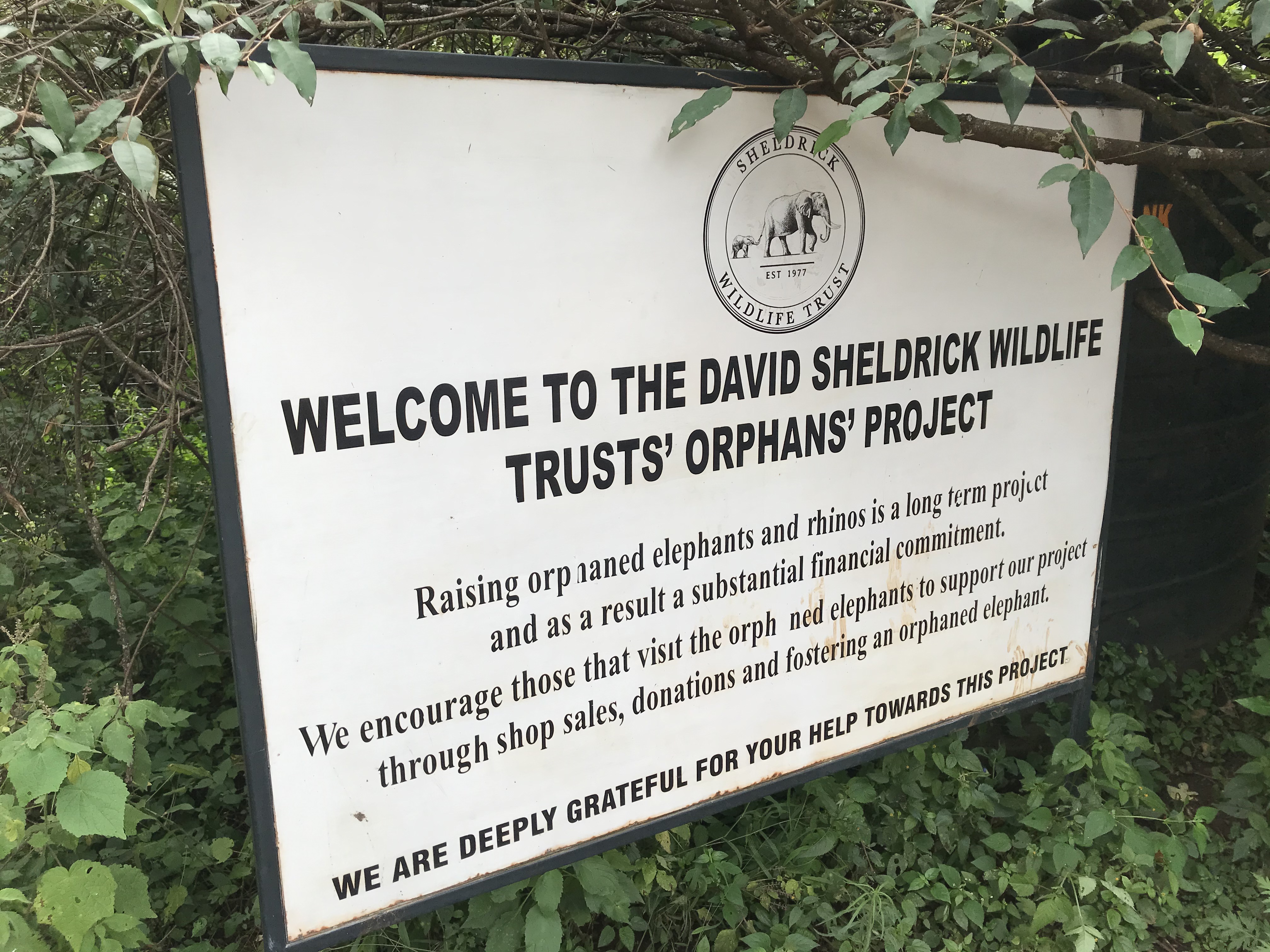 The natural bonds created between the keepers and the eles were obvious, and the hour we spent there provided much humour and an insight into the ecology of Africa’s greatest mammal. 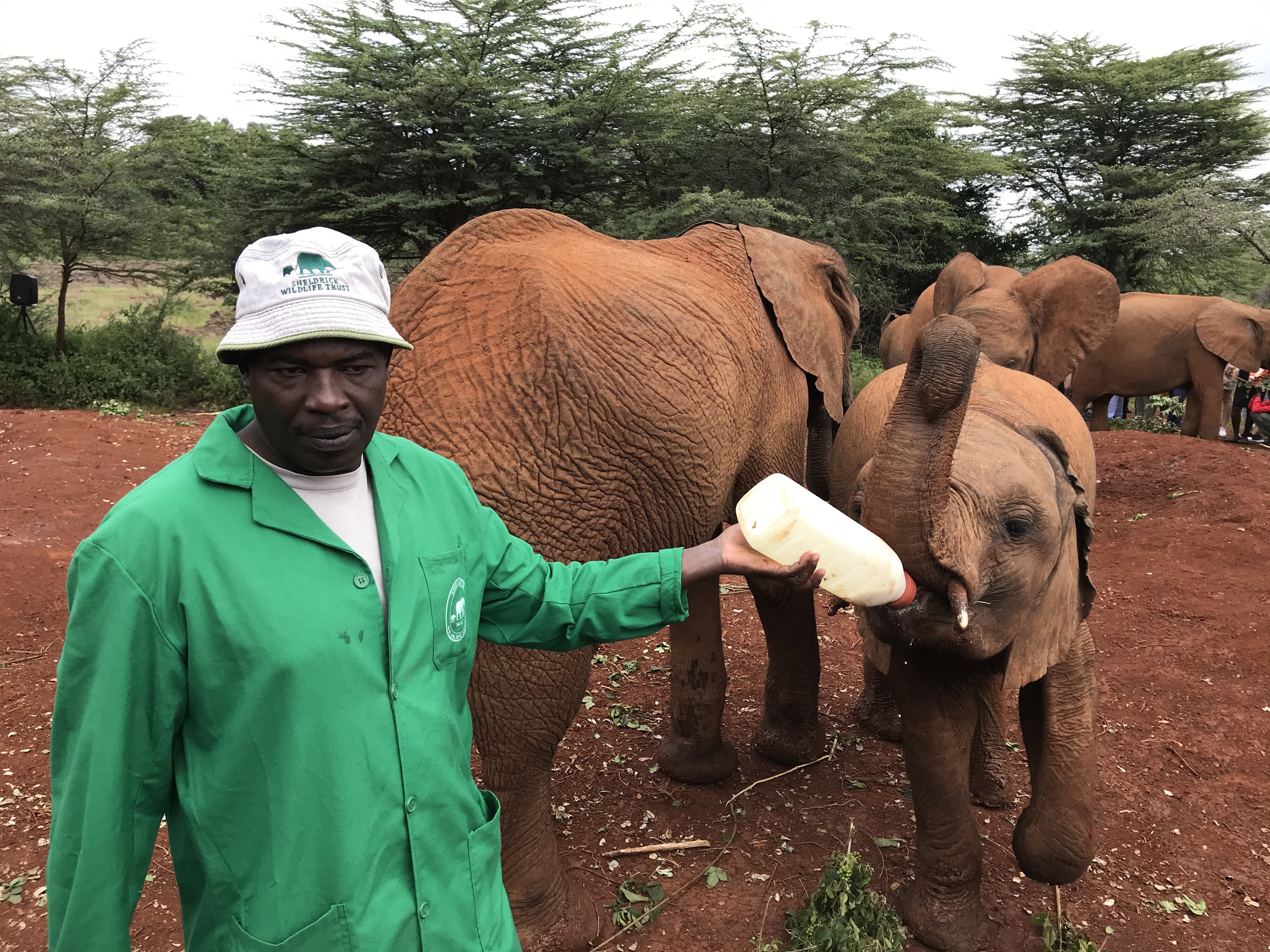 With mounting excitement we left behind the urban sprawl and green savannah plains of upcountry Kenya for the palm-fringed white sand beaches of the Swahili coast, where dhows have been plying their trade from Arabia and India for millennia. 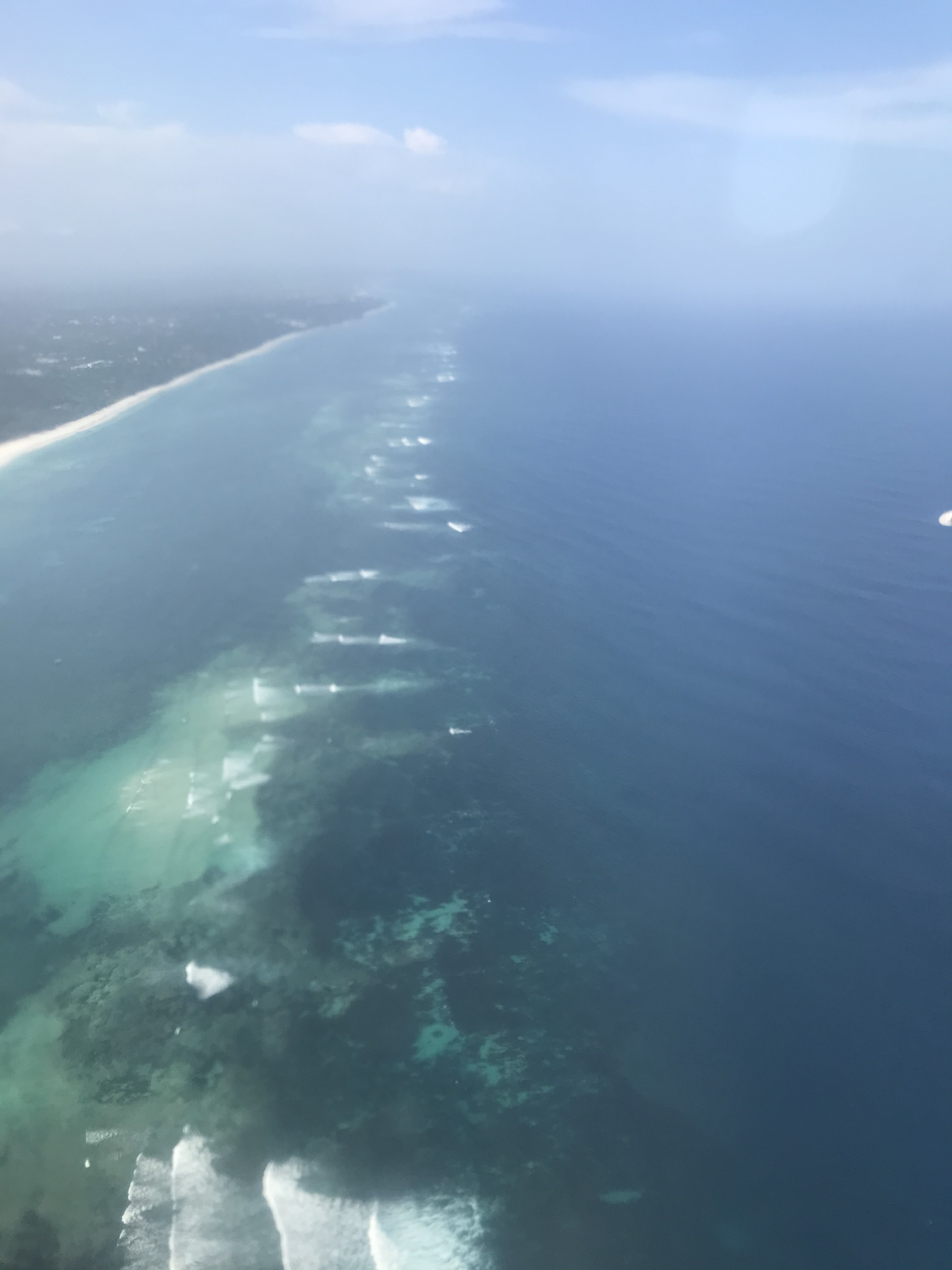 Above: Flying over the Kenya coast. 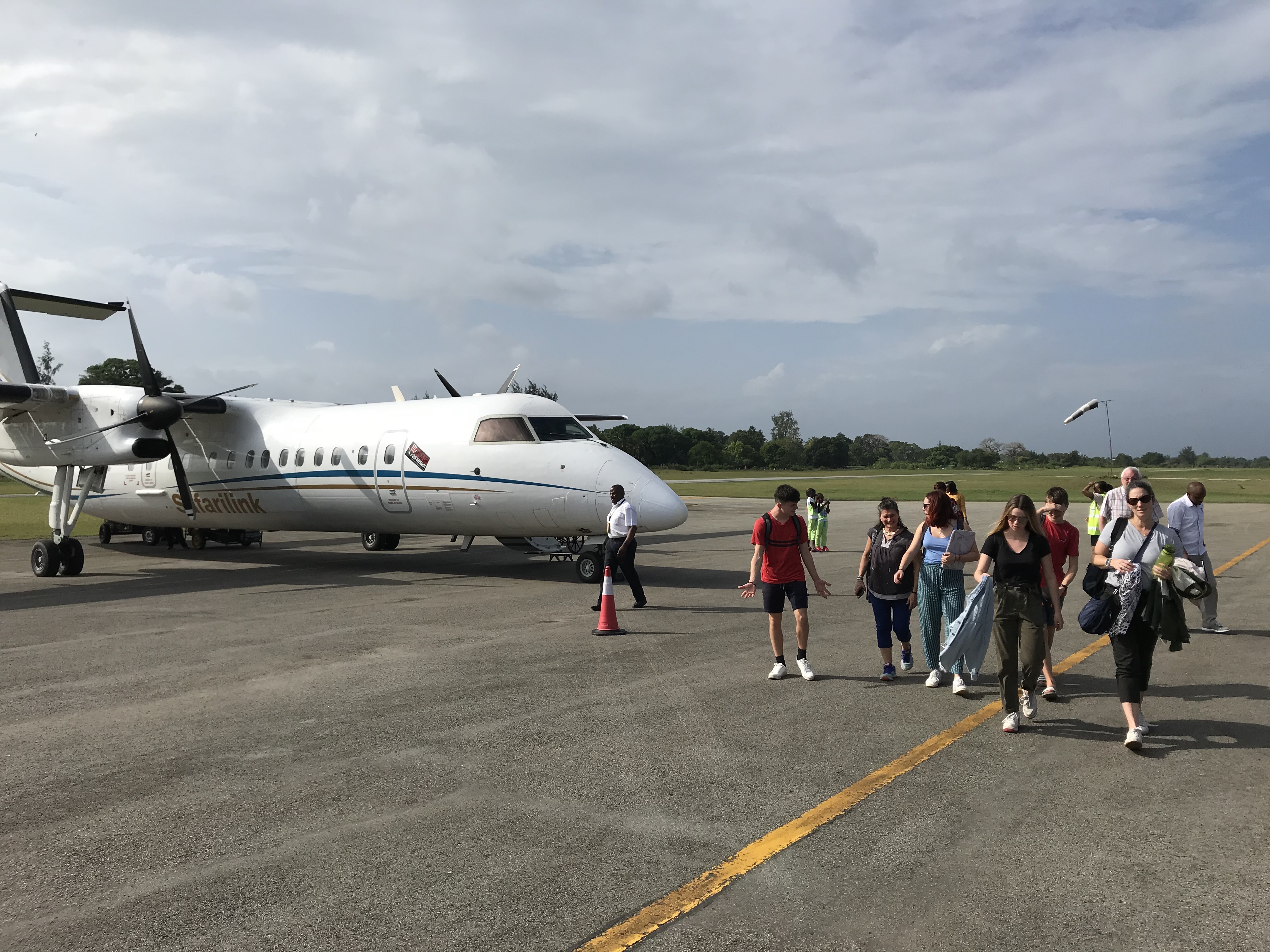 Above: Arriving at Ukunda Airport.

Our base was Pinewood Beach Hotel, situated at the far southern end of Galu Beach, which is the southern extent of the magnificent Diani stretch of coastline. 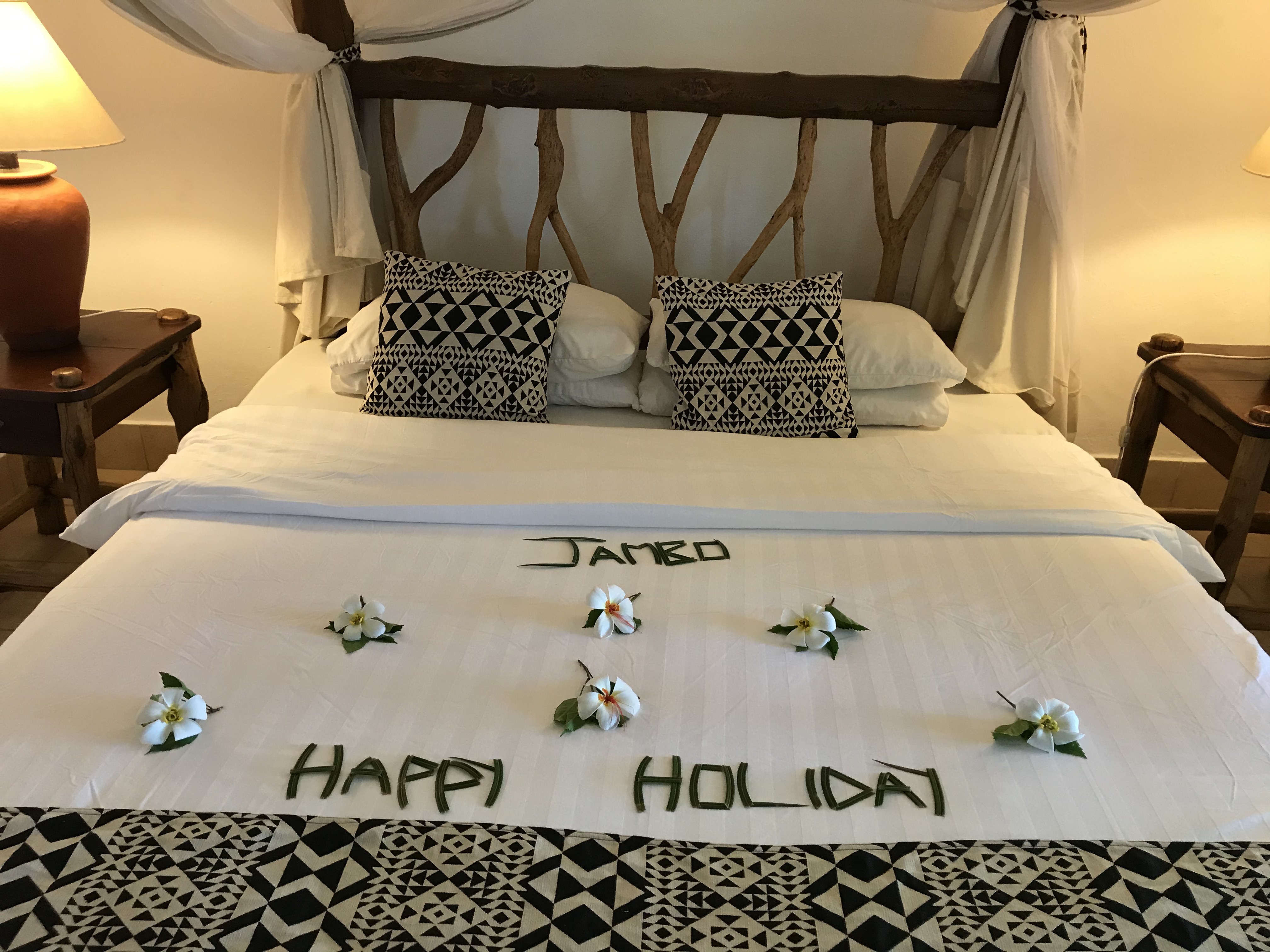 Within minutes of our arrival we were running across the soft white sand and splashing in the warm, aquamarine waters of the Indian Ocean. 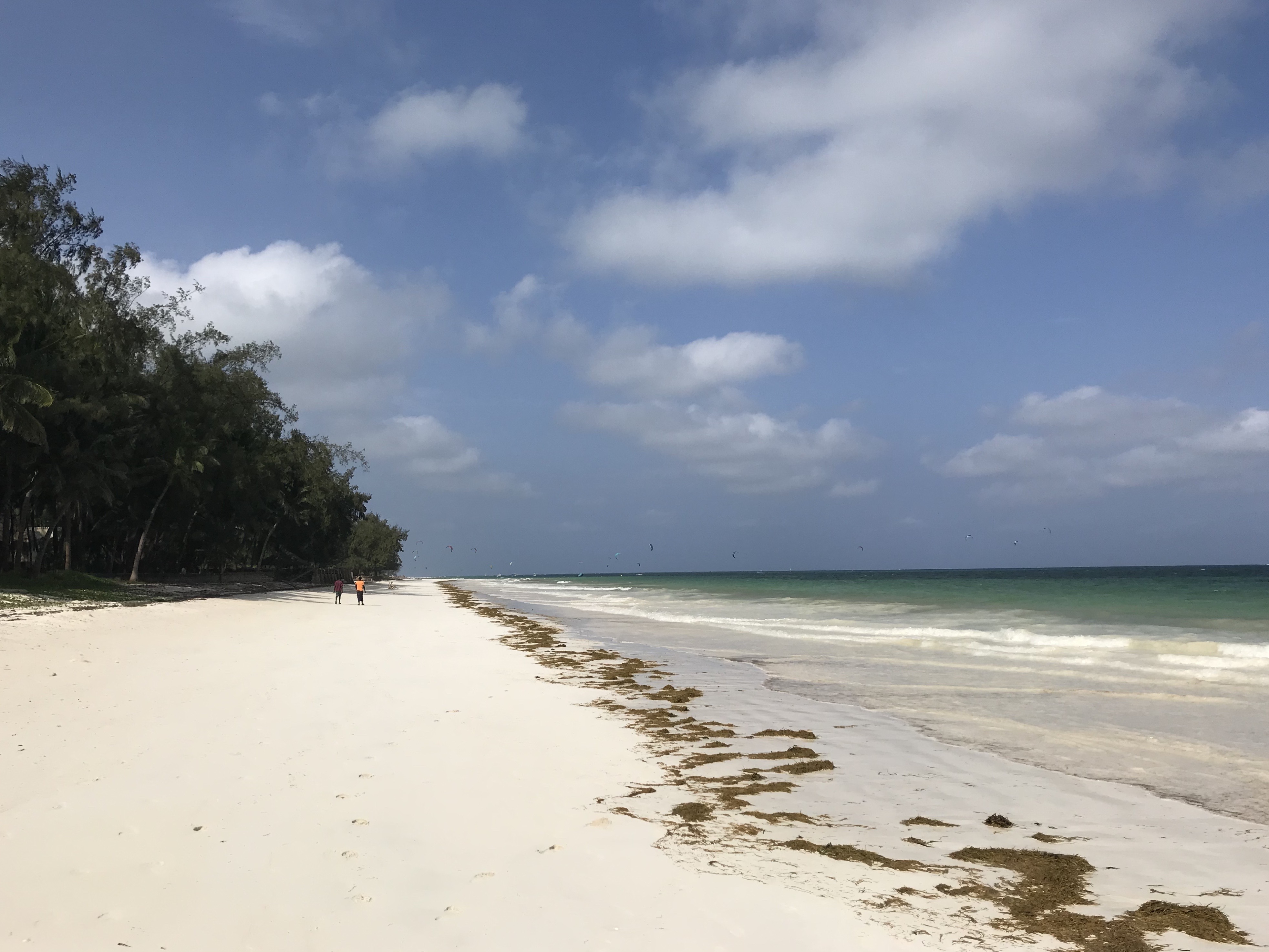 The pace of life moves slowly at the coast and the course of our days was no different: breakfast of fresh mango & pawpaw watching Golden Palm Weavers build their nests by the hotel’s dining room terrace; walking, reading, playing board games, teatime volleyball matches, snorkeling at the reef and swimming in the pool and ocean; feet in sand al fresco lunches & dinners at the top of the beach.

Above:  Early morning on Galu Beach. 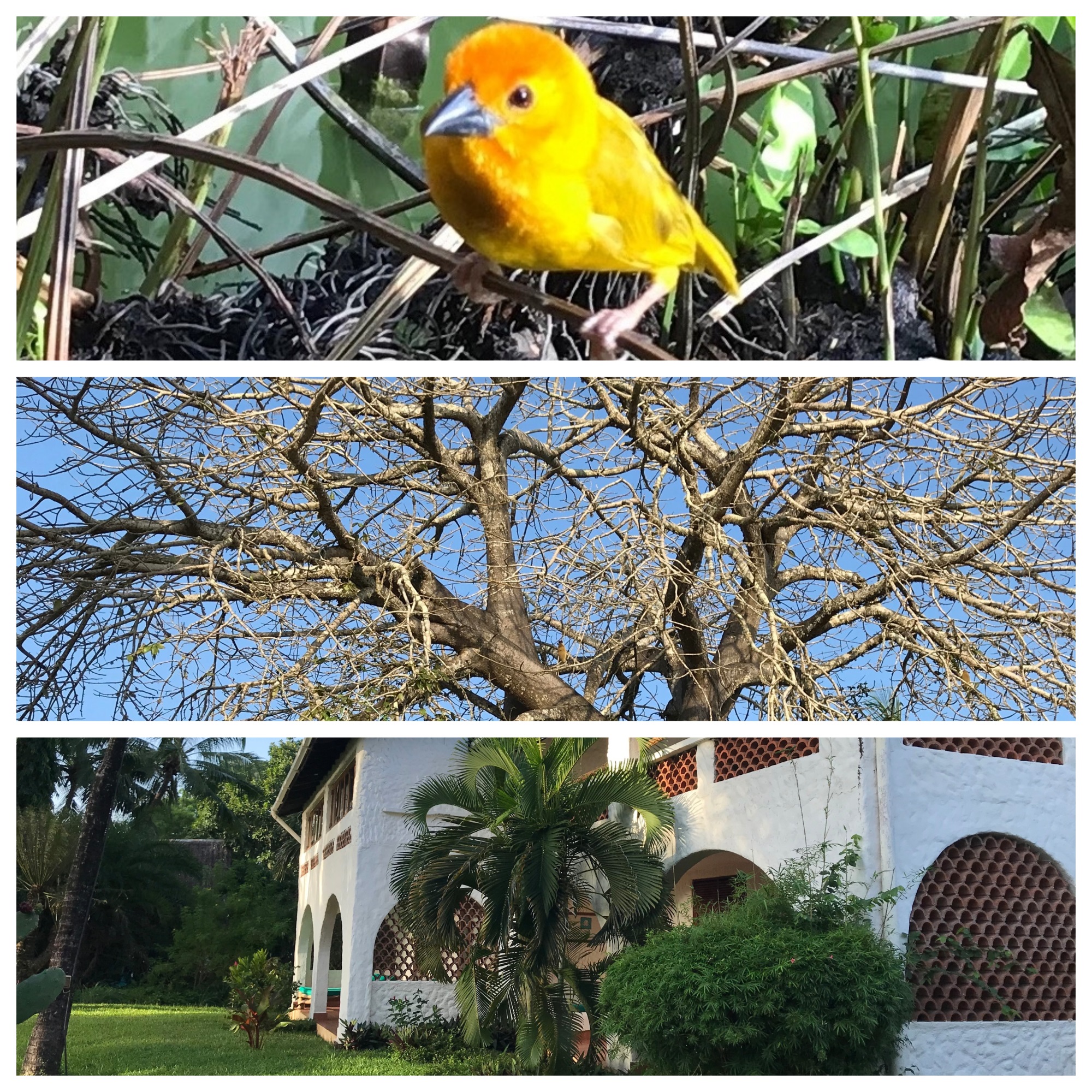 Above:  Top: Golden Palm Weaver. Middle: Birding from the grounds of our hotel.  Our rooms at The Pinewood. 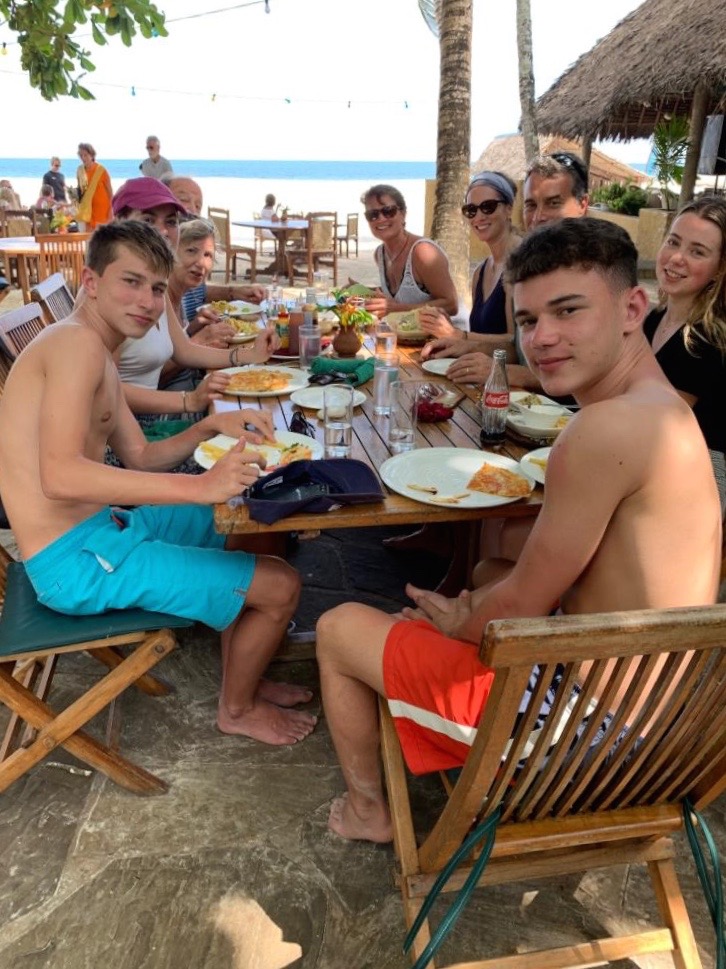 Above: Lunch beside the beach at Pinewood.

Christmas was marked by the Christian hotel staff choir singing hymns after dinner on Christmas Eve, followed by our half hour of present opening the next morning; otherwise one could have been forgiven for thinking it was just another day in the tropics. 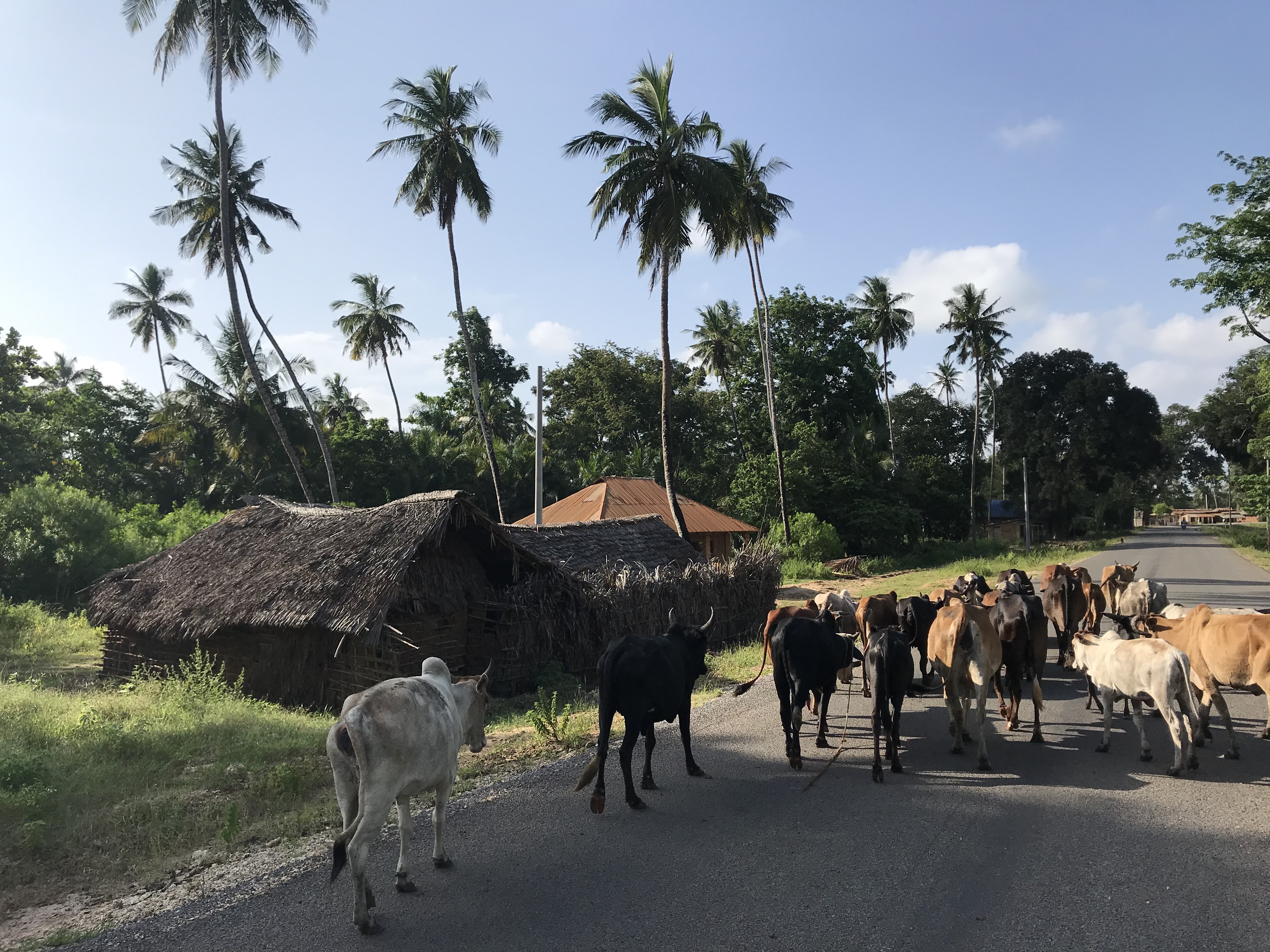 Above:  The road to Shimoni.

On one day we drove south through baobab studded woodland and coastal bush to Shimoni, close to the Tanzanian border. 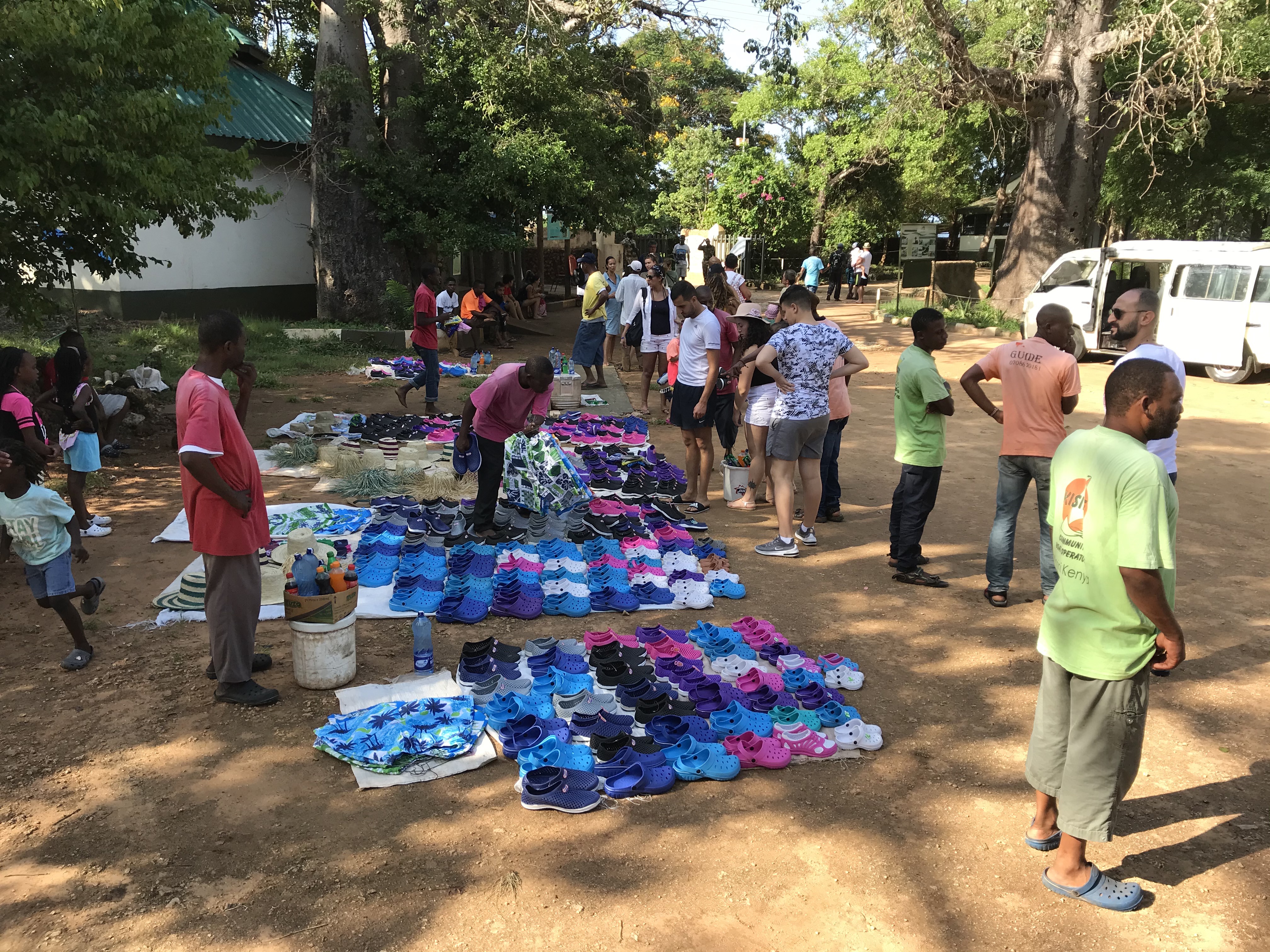 Above:  The croc market at Shimoni.

The old Customs House of the 19th Century Imperial British East Africa Company still stands on the headland; the area is also known for coral caves where slaves were hidden before being transported to Arabia. 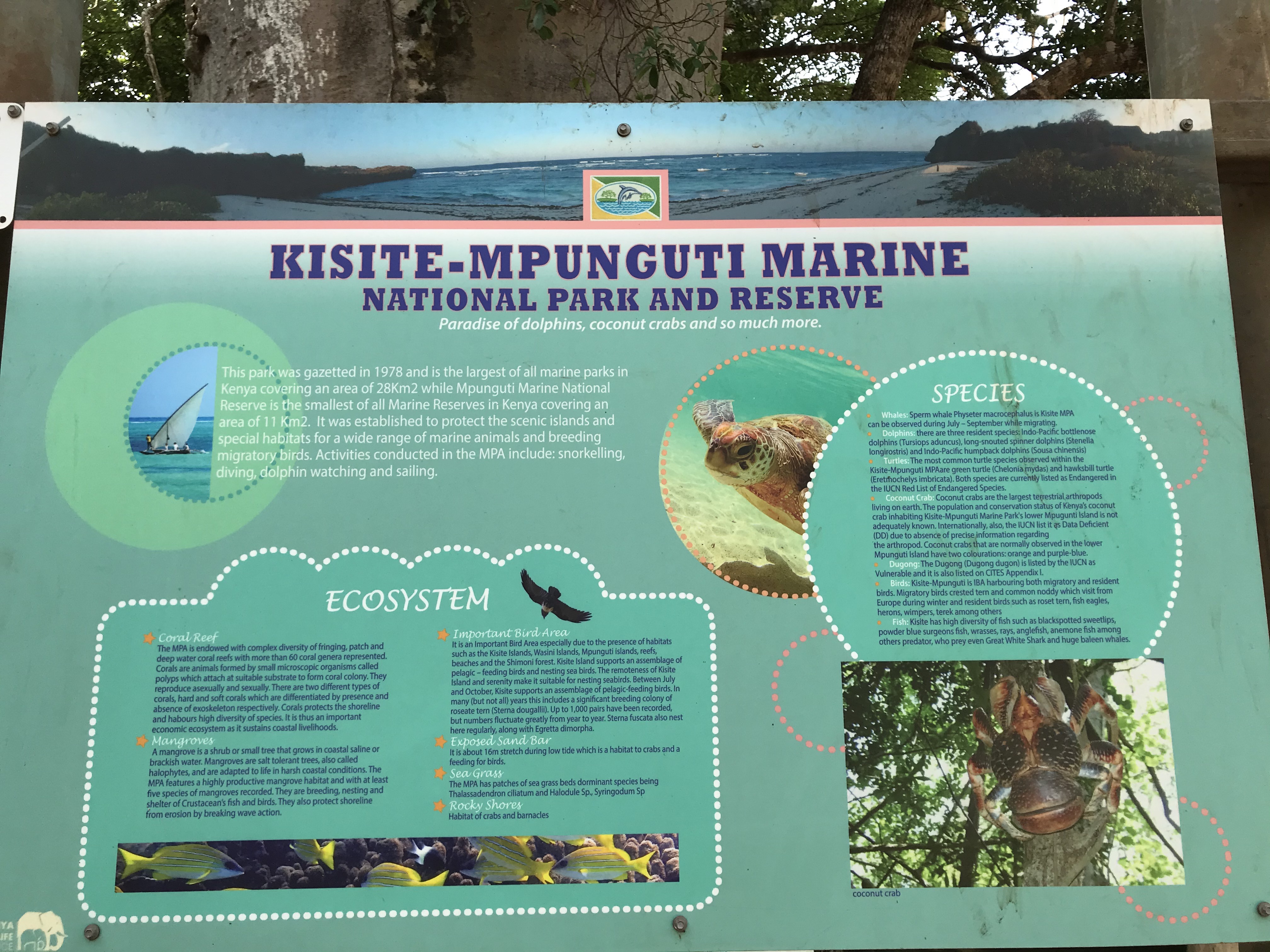 We sailed out by dhow onto the calm, turquoise ocean, soon running into several bottlenose dolphins which playfully circled the boat. 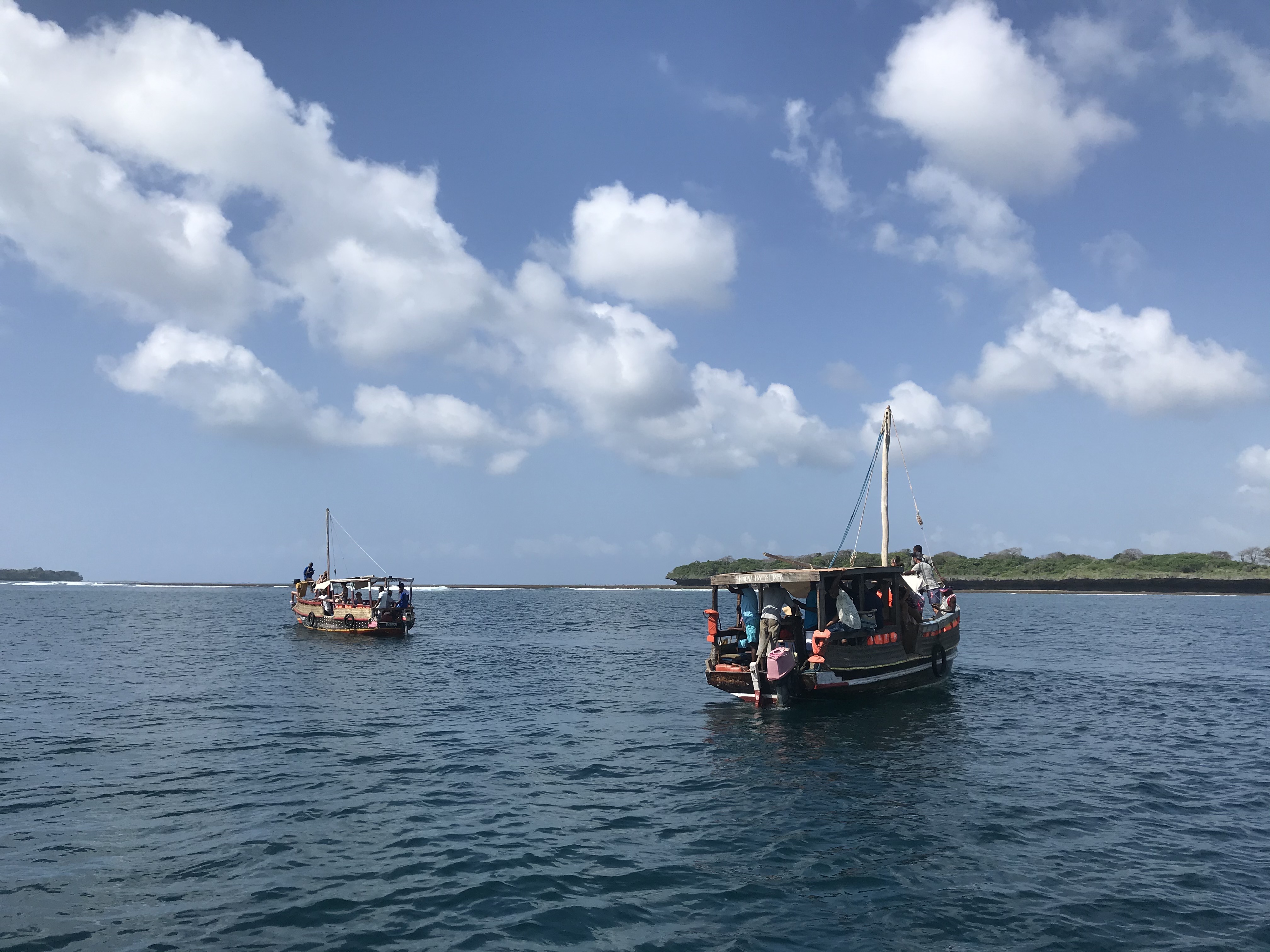 Donning masks, snorkels & flippers we snorkeled along a very good stretch of reef which was home to colourful corals (despite some bleaching) and myriad marine life including green turtles, very large unicorn fish, batfish, Moorish Idols and lots of damselfish. 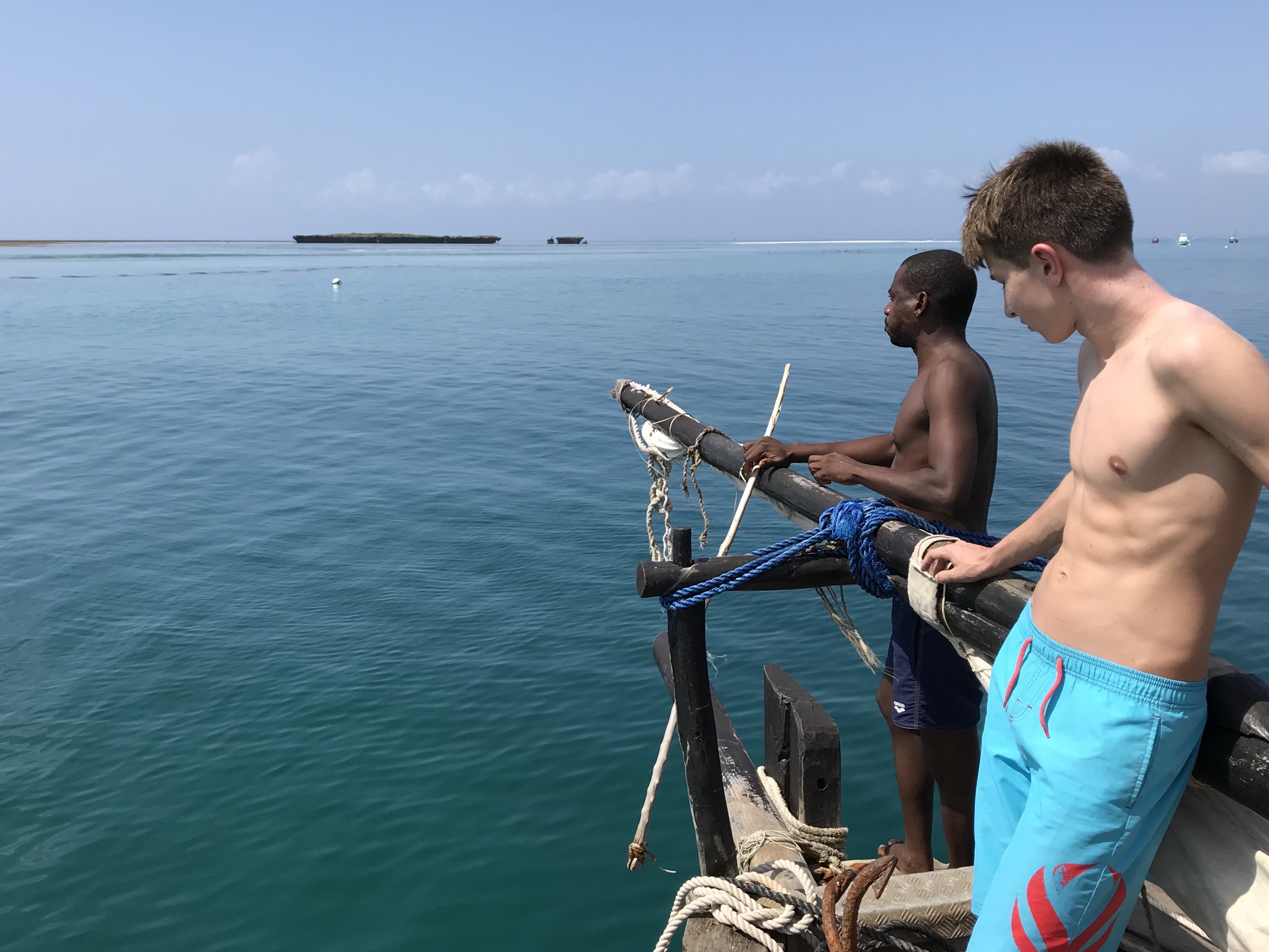 We motored on to Wasini Island where we enjoyed an open air lunch of crab, rice, chapatis, vegetables & different sauces, followed by refreshing watermelon and other fruits. 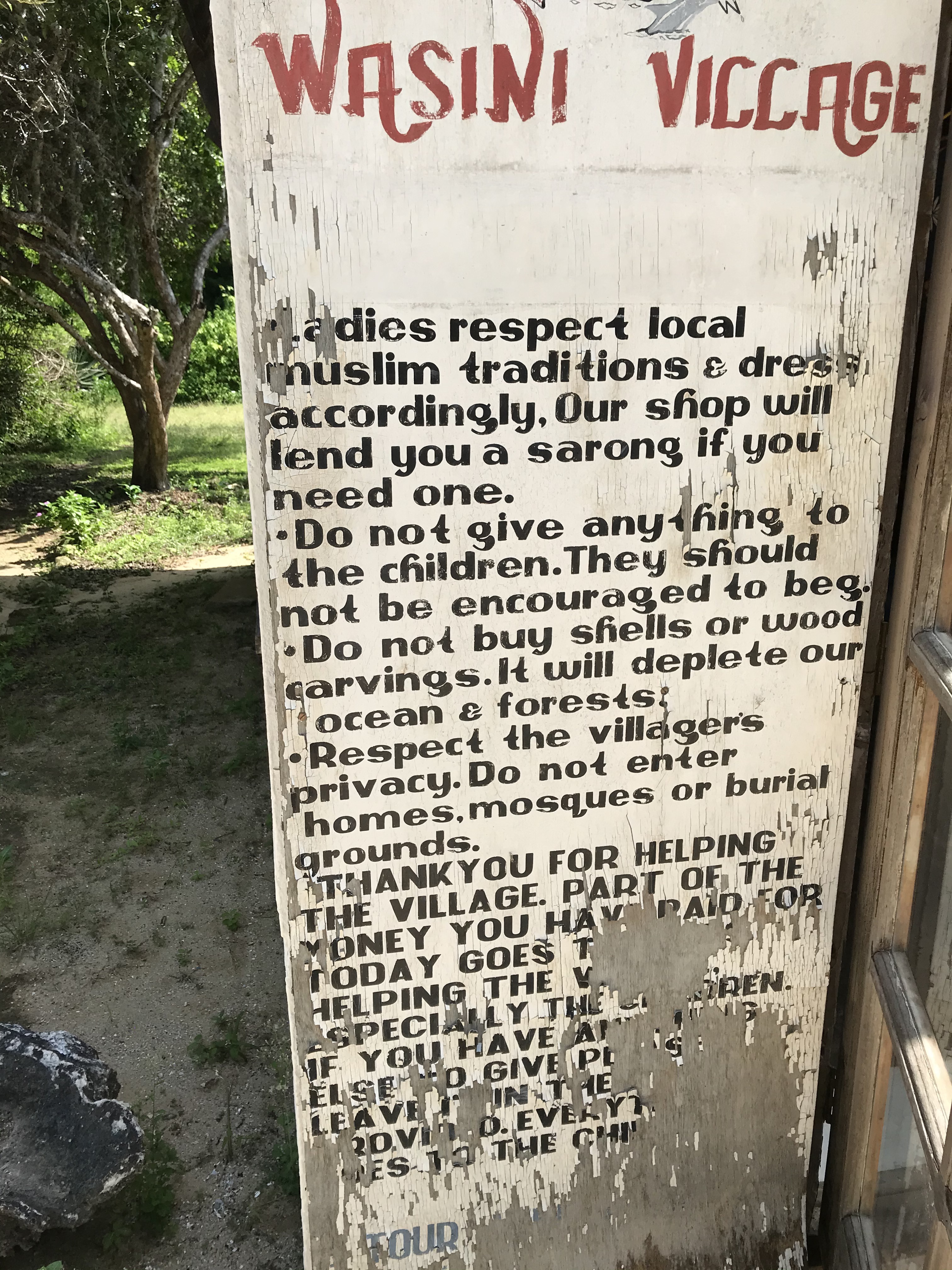 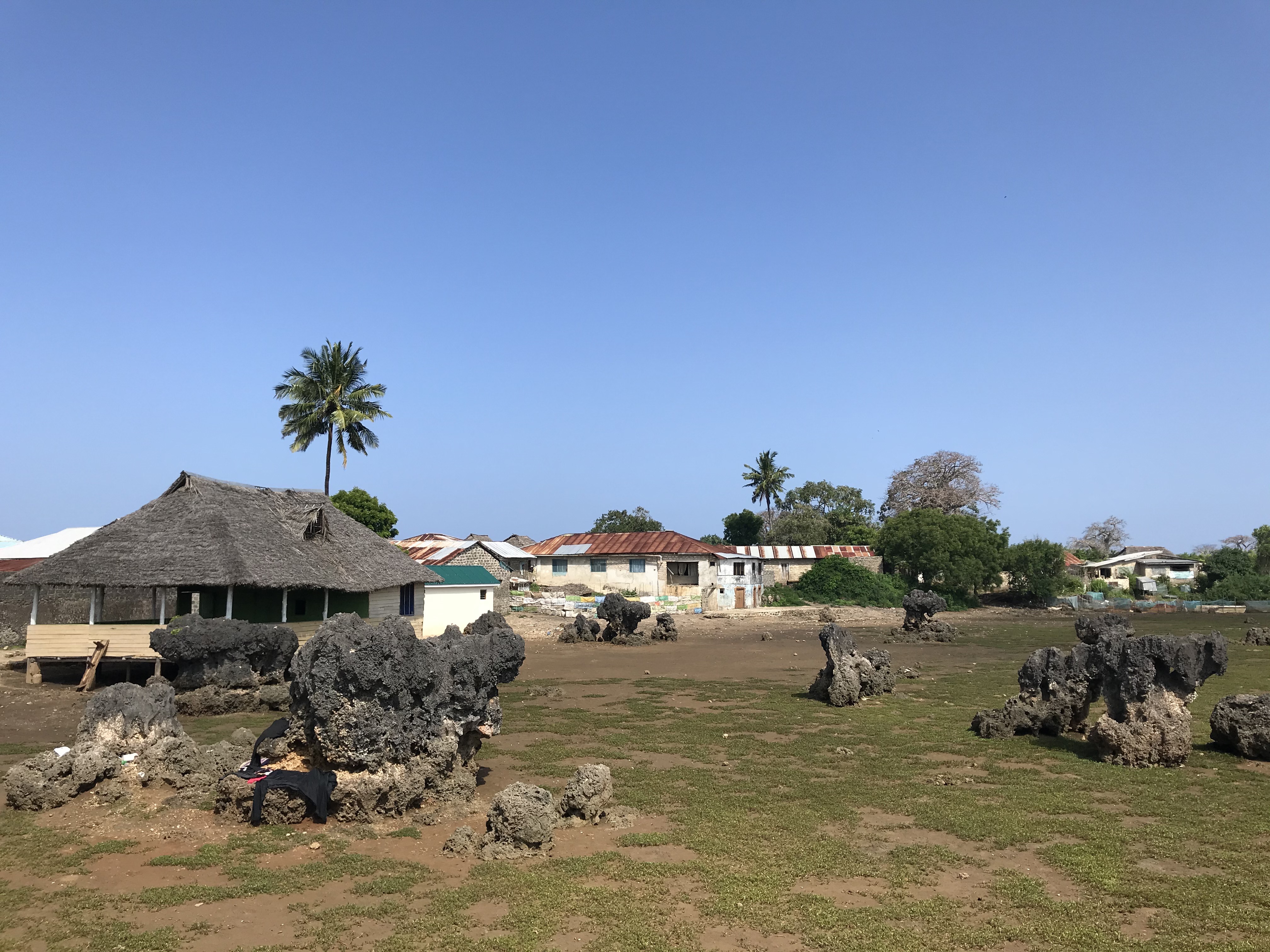 One of the boat guides led us on a short walking tour to the small Swahili settlement of Wasini town (more like a large village), passing a coral rock quarry and covered fresh water reservoir, as well as several ancient pillared tombs, which lay half covered in green vegetation next to the ruins of an ancient mosque. 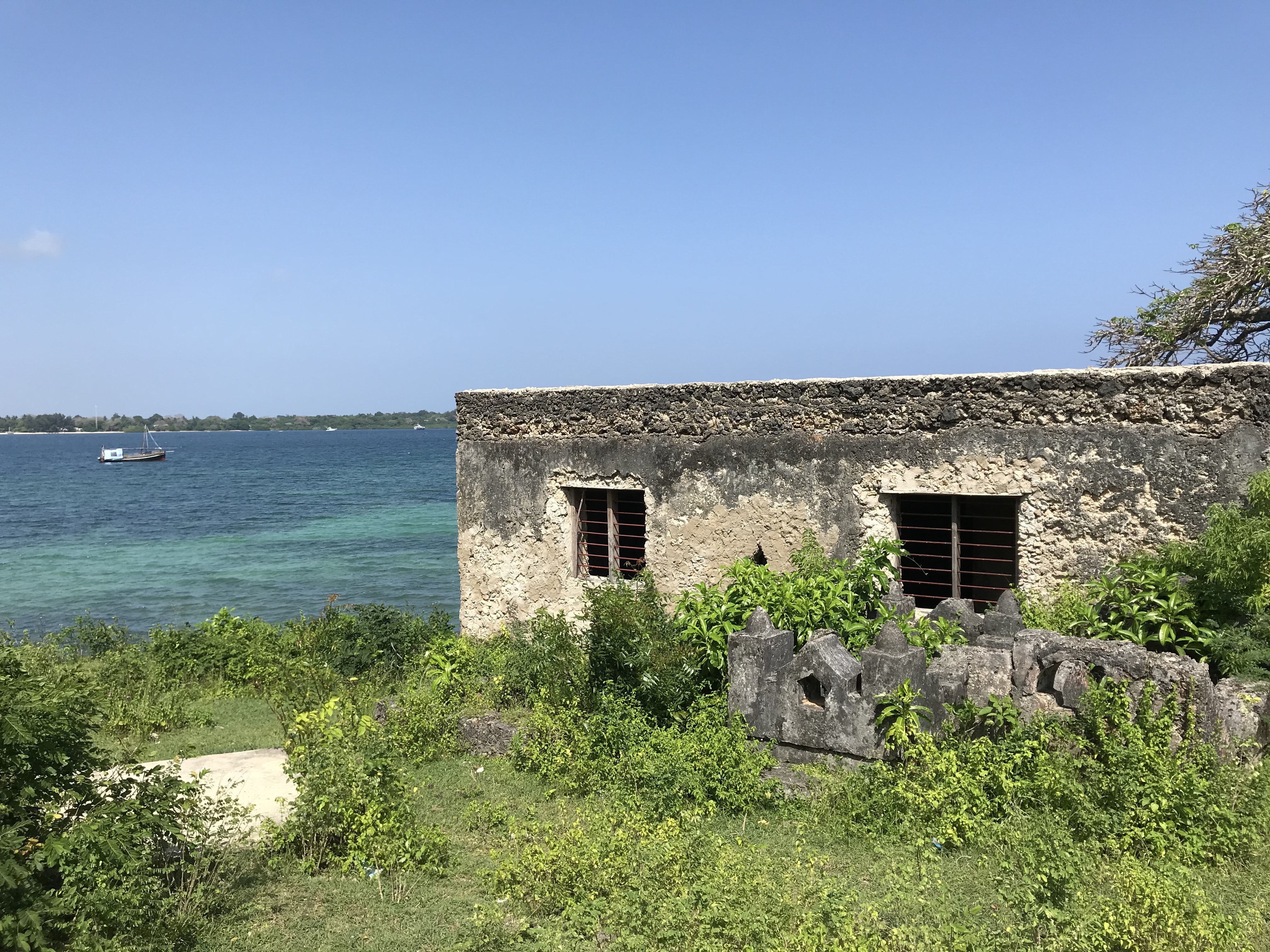 At the edge of the community of coral and breeze block houses stretched an extensive coral garden of black, weathered coral outcrops standing amongst mangroves – a uniquely picturesque scene. 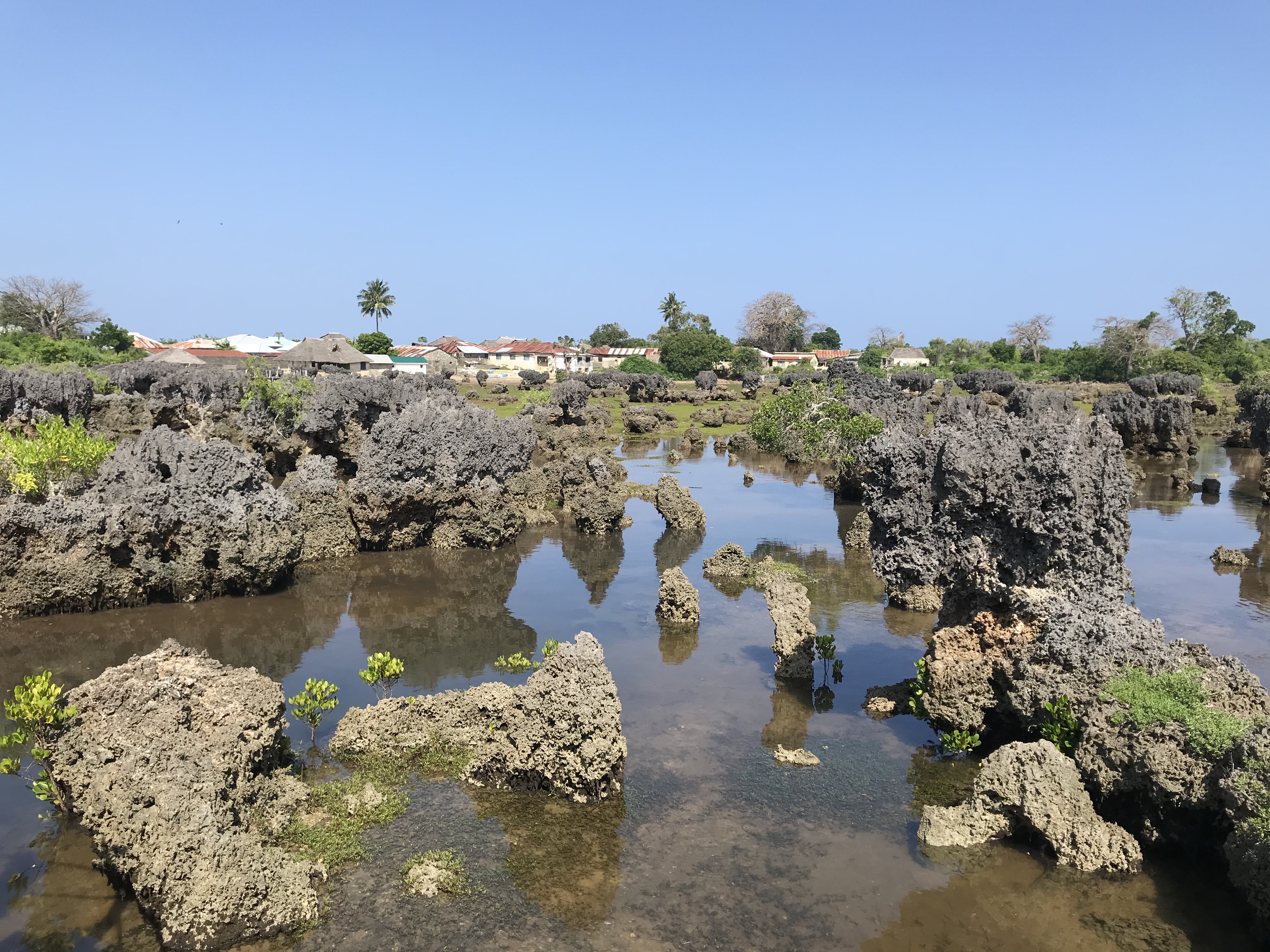 The Kenya coast remains home to some of the most beautiful beaches of the Indian Ocean, although it is best to avoid the busiest areas, especially at peak travel times. We are very keen to encourage sensitive, low impact tourism in a region where thousands of people rely on overseas visitors for their livelihoods. One of the most refreshing aspects of the holiday was the generosity of spirit and friendliness of the hotel staff at Pinewood, both Christian & Muslim, working side by side. 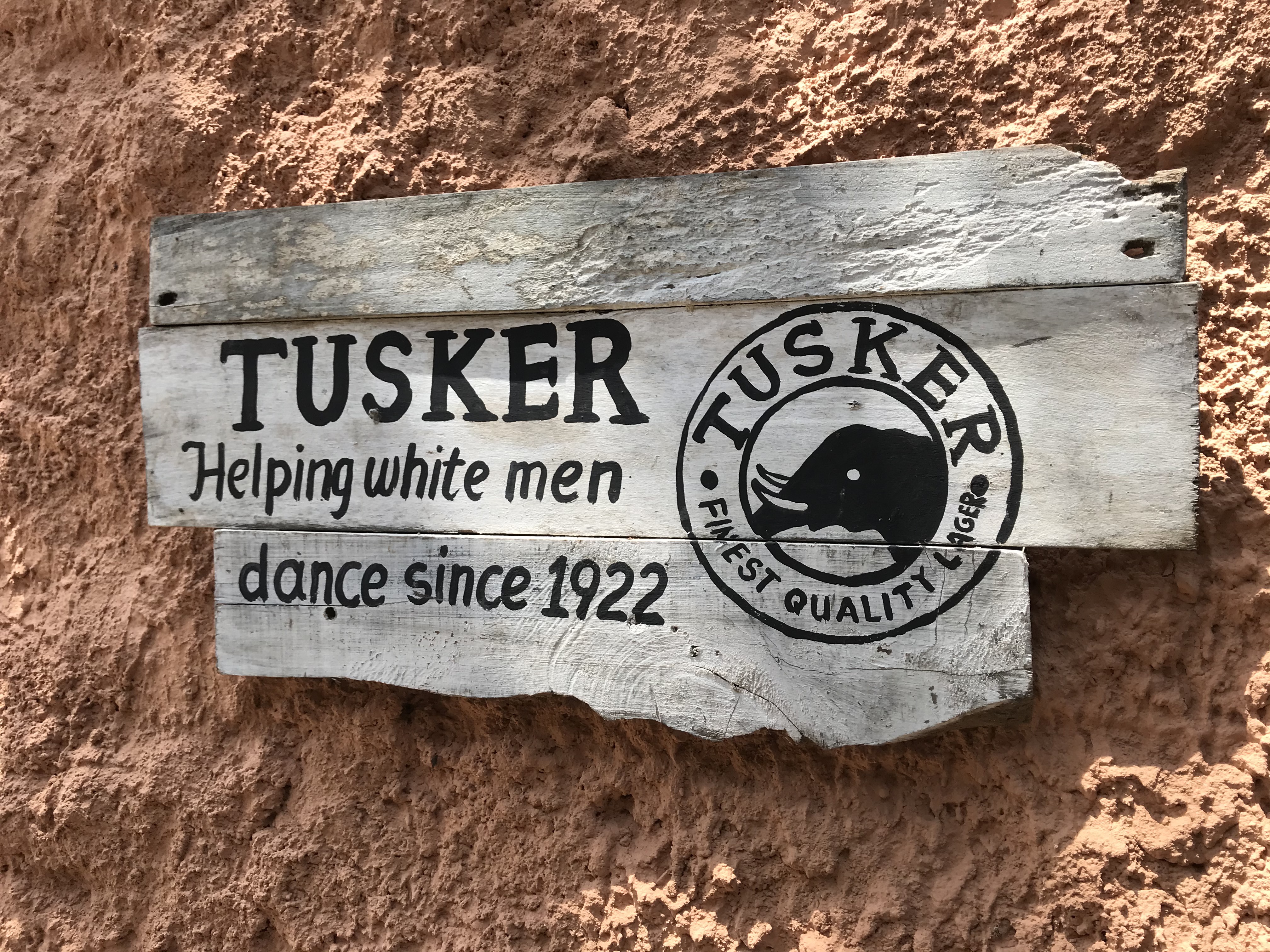 Above:  My argument for drinking beer!

Please do telephone me to discuss this holiday or any other holiday ideas – in the meantime happy planning !