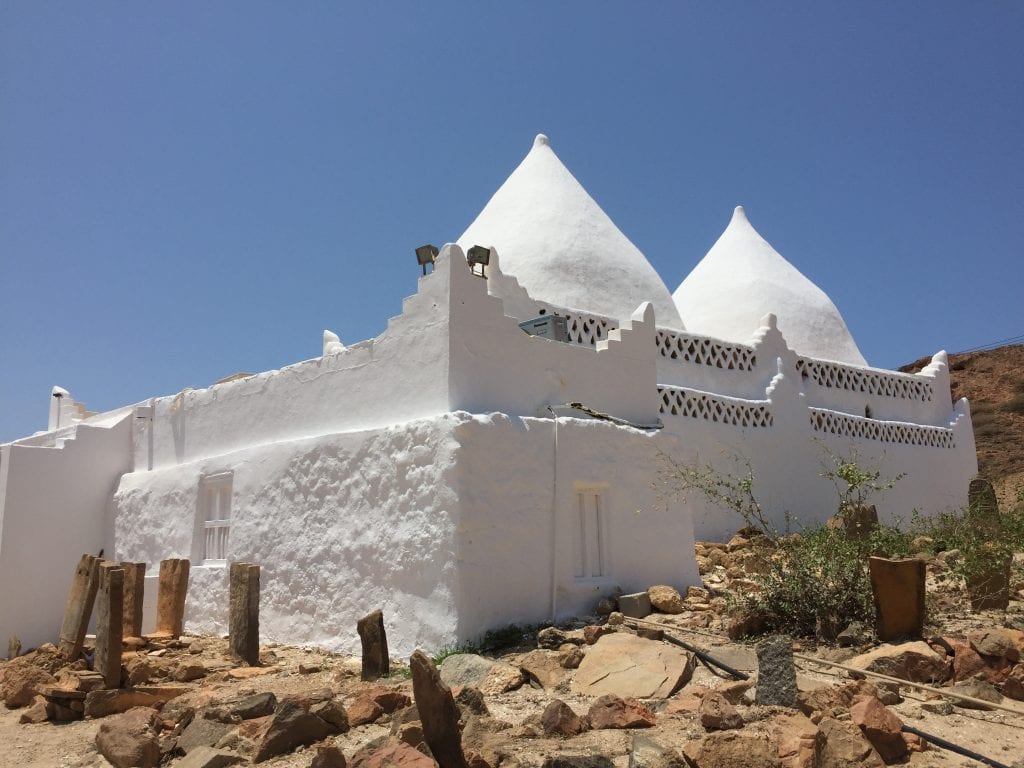 14 Sep Forts, Frankincense and a First Attempt at Sandboarding!

Posted at 15:53h in Travel Inspiration by wo_admin 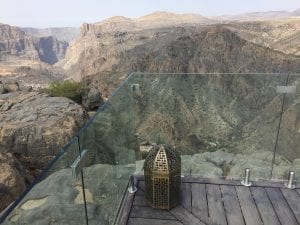 Twelve years after my first visit to Oman, it was fascinating to see how the country had changed in the intervening years and how fast it has developed. Muscat and its satellite towns have developed and expanded through the surrounding mountainous valleys, whilst a huge road building programme now offers much reduced drive times and easy driving into the desert, the mountains and along the beautifully scenic coastal road. 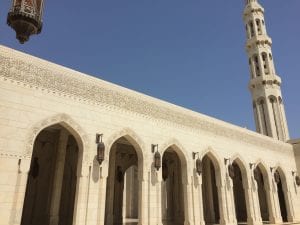 Above: One of Oman’s architectural treasures; Muscat’s fabulous mosque – the design of mosques in Oman has been marked by simplicity, in line with the laws of Islam and the Sunna of the Prophet so as to achieve the spiritual functions of the mosque

Oman is renowned for its glorious winter weather, but as a work trip I had to go in May when the weather seriously heats up so I arrived into a sweltering Muscat that was basking in temperatures of 43 degrees ! The capital city is split into lots of smaller ‘towns’ that are then divided by the jagged mountains as they approach the coast and each of these areas has plenty to boast about with fascinating souks, bustling and rather smelly fish markets, the brand new National Museum, the fabulous mosque, the grand or the National Opera House or the charming buildings of Old Muscat town. 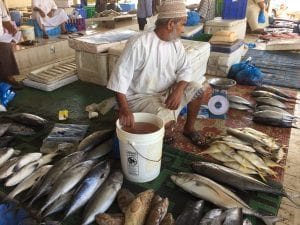 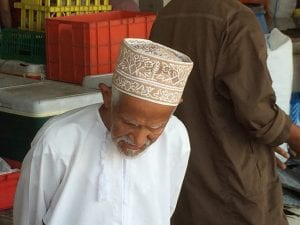 Above: A local man contemplating a purchase in Muscat’s fascinating Souk

A one hour flight then brought me down to Salalah for a couple of days exploring this fascinating and much underrated part of the country. Salalah combines not only the intriguing history of Mirbat and Khor Rhori where Cleopatra reputedly sent her ships to buy frankincense, but the beautiful Dhofar Mountains which rise steeply from the coastal plain and the many plateaus are punctuated by narrow and deep gorges where you can get a wonderful glimpse of a very different rural world.

Above: The result of the khareef

This southern part of Oman is famed for the khareef or monsoon that blankets the area in a misty, drizzly fog between July and September which cloaks the area in a lush green carpet and the wadis are full of life with waterfalls and animals and so an early Autumn visit is highly recommended as the khareef will have finished, yet the area is still emerald green.

The fabled ‘Lost City of Urbar’ which an expedition, including the explorer Sir Ranulph Fiennes, discovered in the 1990’s is accessible from Salalah, and although the vast rolling sand dunes of the Empty Quarter have not revealed many of the city’s secrets, it is still possible to visit the area and enjoy exploring the frankincense trail and learning about this remarkable tree that is famed for not only its aromatic fragrance and use as incense but also as a therapeutic ingredient and since ancient times Frankincense has been seen by the Dhofari people as not just a tree, but as a symbol of life and an embodiment of its culture and history.

Above: The Anantara Al Baleed Hotel

The beaches of Salalah are also a real highlight and the brand new Anantara Al Baleed Hotel offers a level of 5 star luxury and style that has always been lacking in the region. Having checked in for a couple of days into one of their One Bedroom Pool Villas, this stunning new resort is without question, THE place to stay whilst exploring this fascinating part of the country.

Having flown back up to Muscat I picked up the shiny white 4×4 and drove to Nizwa and on up into the Jebel Akhdar mountains. Rising to just over 3000m at its highest point, these craggy, jagged mountains offer a cultural feast with not only lots of mountain hikes to little villages but also visits to the Al Hoota Caves, Bahla fort, Jabreen Castle, lush wadis or the nearby city of Nizwa with its mighty fort, souk and animal market.

The Anantara Jabal Akhdar and the Alila Jabal Akhdar are two wonderful hotels offering not only 5 star luxury high up in the mountains, but also some of the most extraordinary and dramatic views imaginable.

Above: The infinity pool of The Alila Jabal Akhdar Hotel

From here I left the mountains behind and headed into the Wahiba Sands, a three hour drive that takes you into the heart of the rich orange sand dunes that characterise this part of the country and home to the nomadic Bedouin people. It was here that I finally made my first attempt to sandboard – a sport that has always looked such fun and it didn’t disappoint. Strapped onto the board one simply stares down rather nervously from the top of the rather high dune and pushes off and hopes for the best. And after several attempts and emptying every pocket of gallons of sand it’s possible to get the hang of it and have a thoroughly enjoyable morning, especially as getting back to the top each time involves some serious dune bashing and gear crunching in a 4×4 !

Above: Desert Night’s Camp is set in the heart of the Wahiba Sands

For those with a little extra time and a passion for turtles (Green, Olive Ridley, Hawksbill and Loggerheard), a detour to the Raz al Jinz Turtle Reserve is well worthwhile. Although the main seasons is in the summer months when it’s really too hot to be there, there are regular sightings of turtles throughout the cooler winter season.

Above: One of the three beautiful pools at The Chedi

And so a fantastic visit to Oman came to an end with a brief stay at The Chedi, which is a temple of sophisticated luxury and indulgence. Although with the 103 metre long swimming pool, which is the longest in the Middle East, any over indulgence can be quickly sorted out !!

All in all, Oman offers an incredibly diverse holiday whether it’s for couples or families and scenically, culturally and historically – the perfect Winter break!